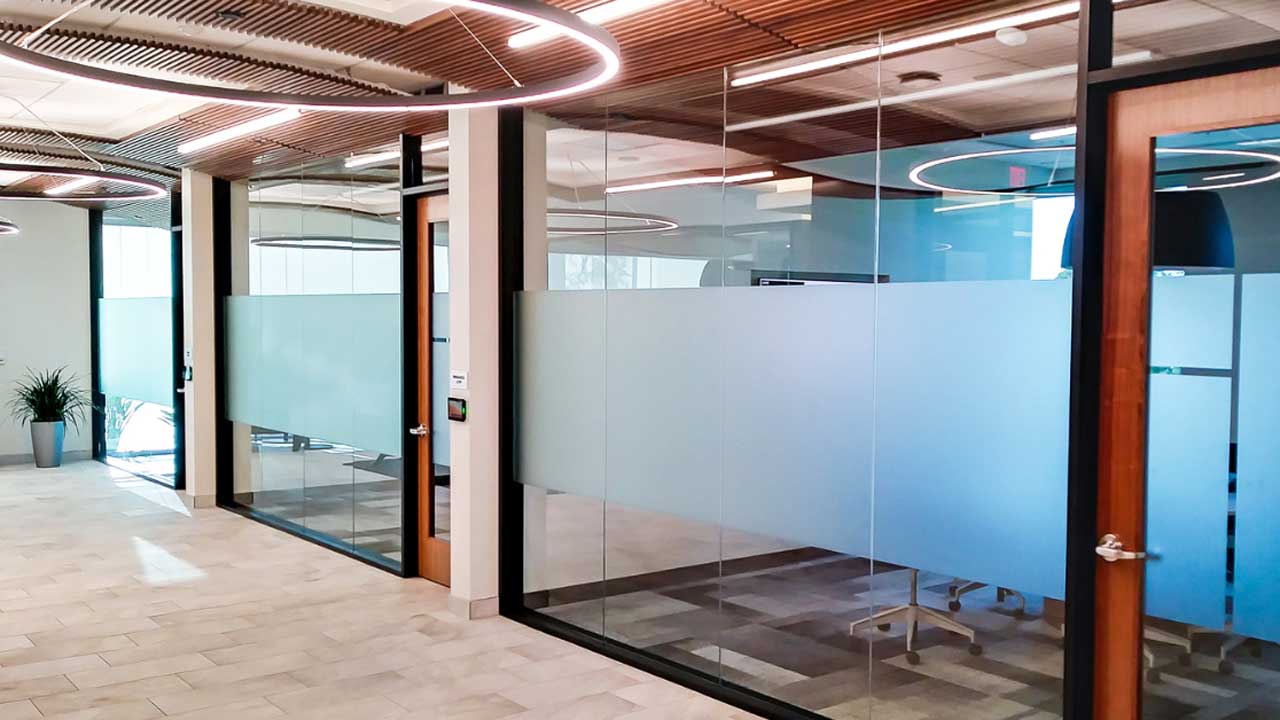 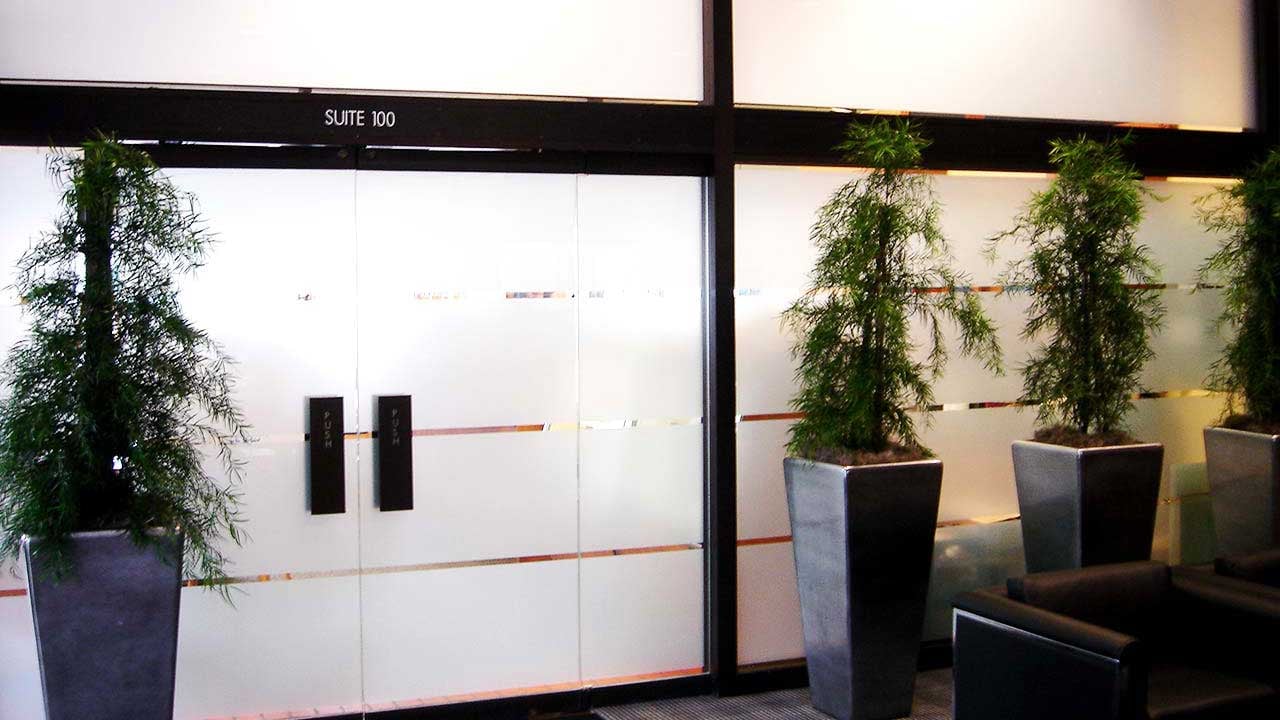 We will be talking with Scott about the difference between frosted window film and frosted glass and the different benefits and purposes of each product. If you are interested in a frosted window film for your home or office or you have been wondering this same question, you don’t want to miss this interview! Scott has been in the window film industry for over 30 years and is extremely knowledgeable on all things window film. Keep on reading to hear what Scott has to say!

What is frosted window film?

What is frosted glass? 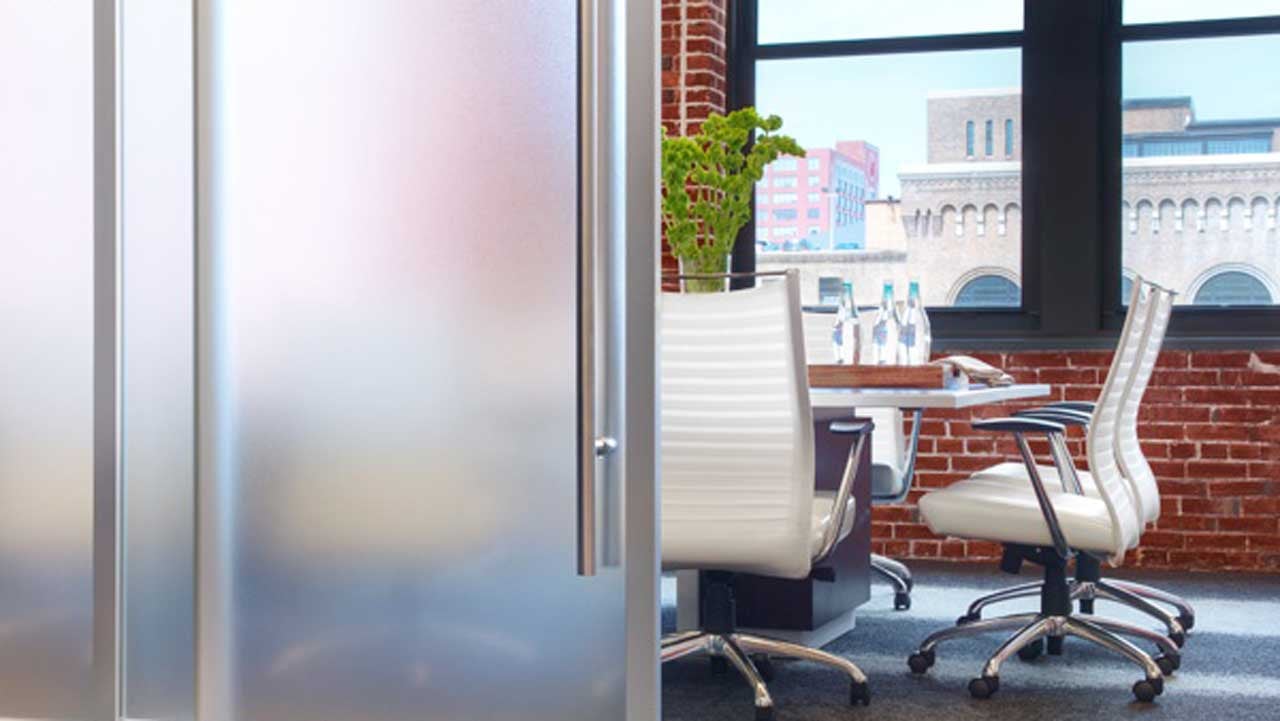 Frosted window film and frosted glass are both used for decorative and privacy purposes. Both of these products are going to prevent people from seeing into or out of a building or home. The visual effect is also very similar with either option and they both have a clean and professional look that isn’t going to change the look of your space. The biggest difference between the two products is frosted window film allows you more creativity and flexibility, and it can be removed if needed.

We spoke with Scott on what the two products look like from a price standpoint. When it comes to pricing, not only is frosted window film far more affordable in the majority of cases, it’s also more sustainable. In general, purchasing window film is more affordable than purchasing glass and when it comes to getting frosted glass installed, you need to replace the original piece of glass as well as the framing. Because of labor and other expenses, this can get expensive, quickly.

Frosted window film is also sustainable because you're not throwing anything into the landfill, which is always a positive! Like we just talked about, if you decide to go the frosted glass route, you have to throw away the original glass. With frosted window film, you are utilizing the same piece of glass and simply installing the technology on top of it.

What are the benefits of frosted glass?

The biggest benefit of frosted glass is its durability. If you have a high trafficked area that needs increased privacy, then frosted glass might be a better option because of its strength and lifespan. For example, if you are looking to find a privacy solution in a doctor’s waiting room, frosted glass might be a better option, because kids could get bored and pick at the window film, or you might have friction or people rubbing against the window film causing it to peel.

What are the benefits of frosted window film? 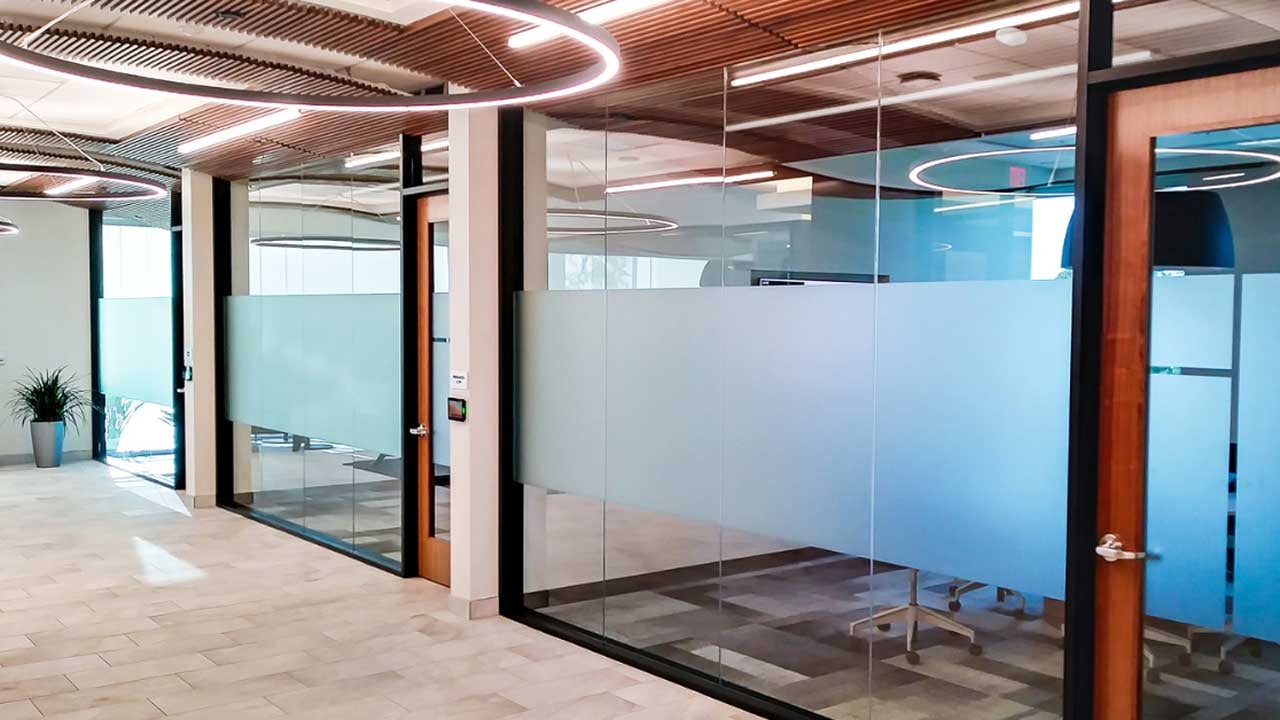 Why are customers looking to get frosted window film installed?

In the next part of the interview, we asked Scott why his customers are looking to get window film installed. The main reason is for privacy. People are looking for a non-permanent way to increase privacy in both homes and offices. 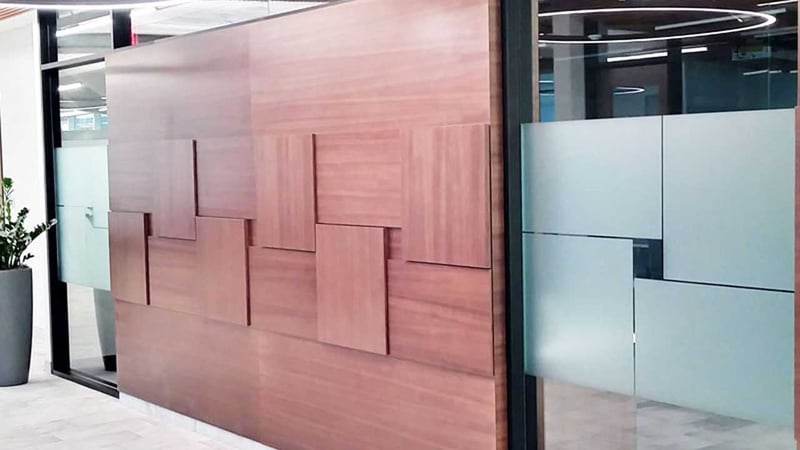 Up next, we talked with Scott about what types of customers usually get frosted window film installed. The number one customer that looks for frosted window film is facility managers. The reason behind this is because they have a lot of occupancy turnover, resulting in re-branding. Frosted window film allows them that flexibility at a reasonable cost as opposed to replacing all the partition glass in the office.

Architects, glaziers, and general contractor’s use frosted window film for similar reasons. Our customers in these industries like frosted window film because of the flexibility it offers in recreating new design or privacy for different areas without having to replace all of the glass.

Where are these customers typically getting frosted window film installed? 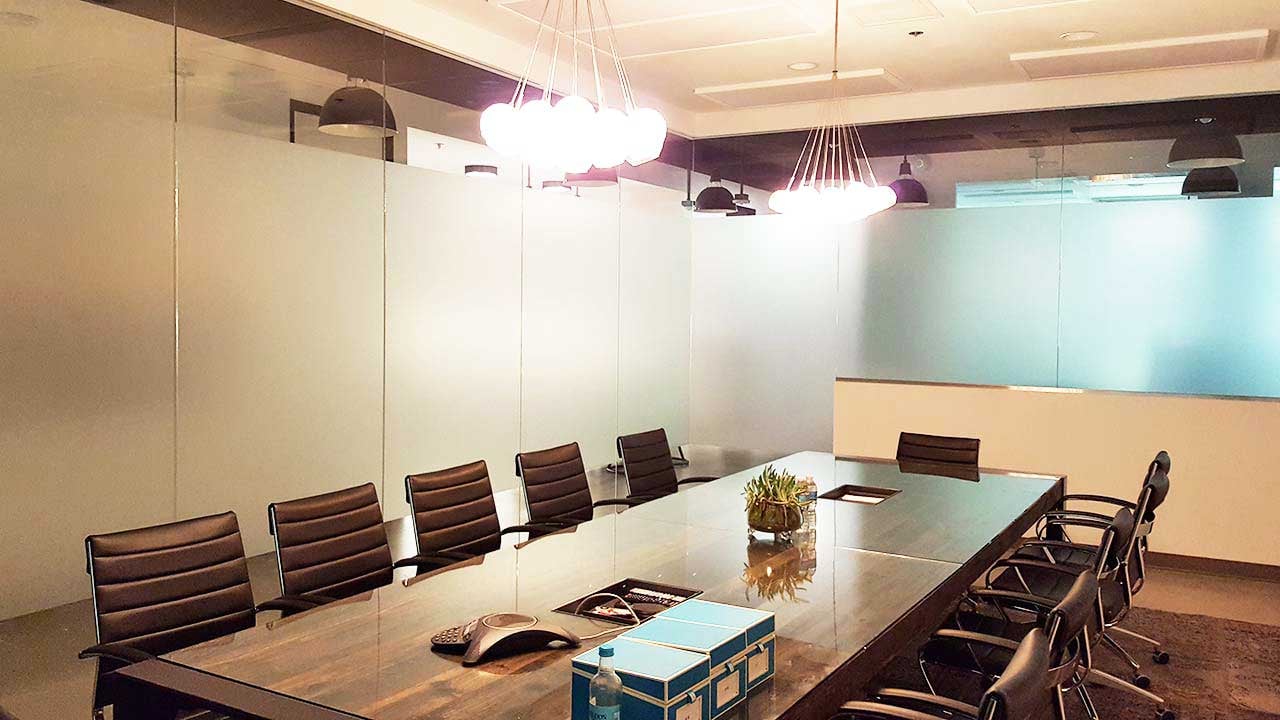 In homes, Scott often sees customers looking for increased privacy in bathrooms, laundry rooms, and pantry doors. Frosted window film has a clean look and is an easy way to hide any mess or prevent people from seeing in.

Frosted window film on storefronts creates security and privacy because it prevents people from seeing inside, which ultimately reduces break-ins. People trying to look inside will only be able to see light transmissions. In warehouse or business environments, frosted window film is an ideal solution to stop the visibility of stored merchandise. It’s an easy way to maintain confidentiality and privacy while keeping a clean and professional look.

Not only does frosted window film increase privacy on storefronts, but it also allows creativity and design with branding statements. You can install your company logo or store hours on your storefront glass to brand your business and let people know who you are and what you do.

In addition to storefronts, glass conference rooms and partition walls in offices are also where his customers frequently request frosted window film. Frosted window film in these areas creates customized privacy with creativity in design. For example, it allows the option to re-utilize and reconfigure an office space if need be and make it open with glass partitions. This is great for the different people Scott works with because it ultimately results in you not having to rip out and throw away all the glass if you ever want to redo your office. It’s easy and affordable, not to mention helps with the green movement because we aren’t dumping more things into the landfill!

Solar Art Can Help You!

There you have it...the biggest differences and similarities between frosted window film and frosted glass. They are very different products that each offer different benefits. Solar Art installs frosted window film to both homes and offices every single day to help with privacy and to add a custom design. Frosted window film is a cost-effective, easy, and temporary (if you want), way to transform your space. If you are interested in learning more about frosted window film or think it might be a good fit for your upcoming project, contact Solar Art today for a free quote!

These Stories on Residential News

How to Find the Right Rental Listing

Solar Art has compiled a list of 5 tips on how to find the right rental listing. Contact Solar Art today for a free quote if you are interested in getting ...

How to Reduce Glare on TV

How to reduce TV glare is an important question in both residential and commercial settings. Solar film reduces glare, heat and harmful UV rays!