Reflective Window Tint For Your Home and Office Windows 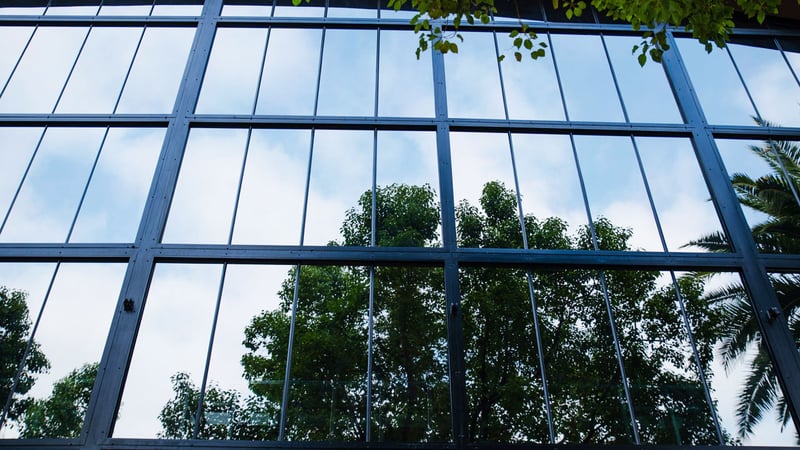 Windows are an important component on how our homes and offices look and feel. They make the space open, airy, and light, which is something we all want. However, open windows can also allow strangers to see in and rooms hot and uncomfortable during the warm summer months. This might lead you to turn on the AC which will only make your energy bill go through the roof. So, what do you do?

Instead of pulling the blinds and living in the dark, modern window film technology not only lets you keep your outside views, it provides privacy and keeps your space feeling cool and comfortable. When deciding on a window film, many customers want both the heat blocking benefits of solar film and the privacy of reflective window film, but they often wonder, "does reflective window film really block the heat?"

*Reader tip: Before we go any further, we wanted to let you know that this blog is loaded with cool window film performance statistics which we love, but we’re also window film geeks! To show the performance statistics in the simplest way to understand, we included graphs and limited the numbers. If you have any questions, please don't hesitate to comment on this blog and ask!

Want to talk more about the benefits of reflective window film?

What is the best window film for heat reduction?

If you aren't familiar with window film, there are a ton of heat blocking window films available that are well-known solutions for uncomfortable heat and glare. Many of Solar Art's customers come to us wanting to know how to cool their homes and offices without darkening their space or losing any outside views. All of Solar Art’s window films will block harmful UVA and UVB rays, and most of our films reduce some amount of heat and glare. The question then, is which window film will block heat the best?

If you’re looking to cool your rooms and privacy isn’t a concern, solar film is a good option. Solar film comes in a variety of different colors and shades, all of which reduce some amount of heat and glare. While solar film will help reduce heat and reduce glare in your home or office, it doesn’t provide any added privacy.

What is reflective window film? 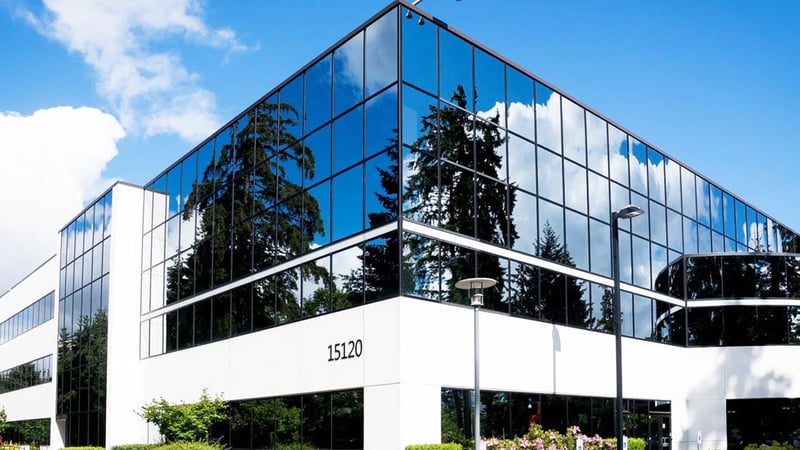 How much heat does reflective window film keep out? 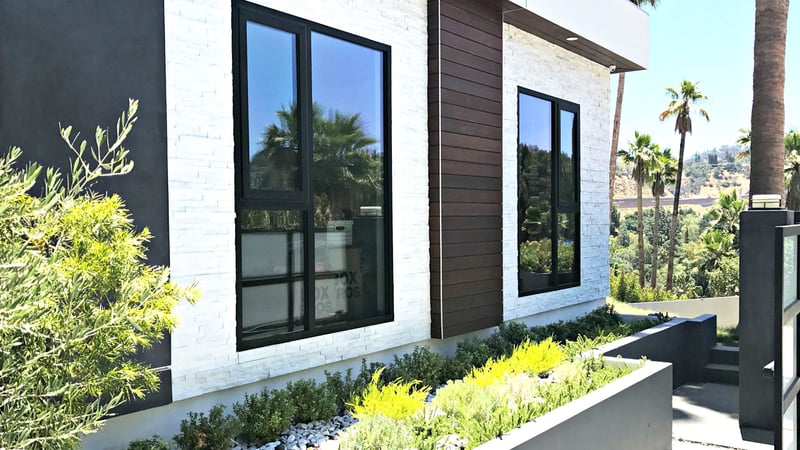 If you want a reflective window film, then you have lots of options. Here's where the numbers and charts come in...so get ready. Don't worry, it won't be that bad!

Window film products have a lot of performance statistics and to make things easier, we put those stats into a graph and compared these four films with untreated clear glass. Let’s take a look… 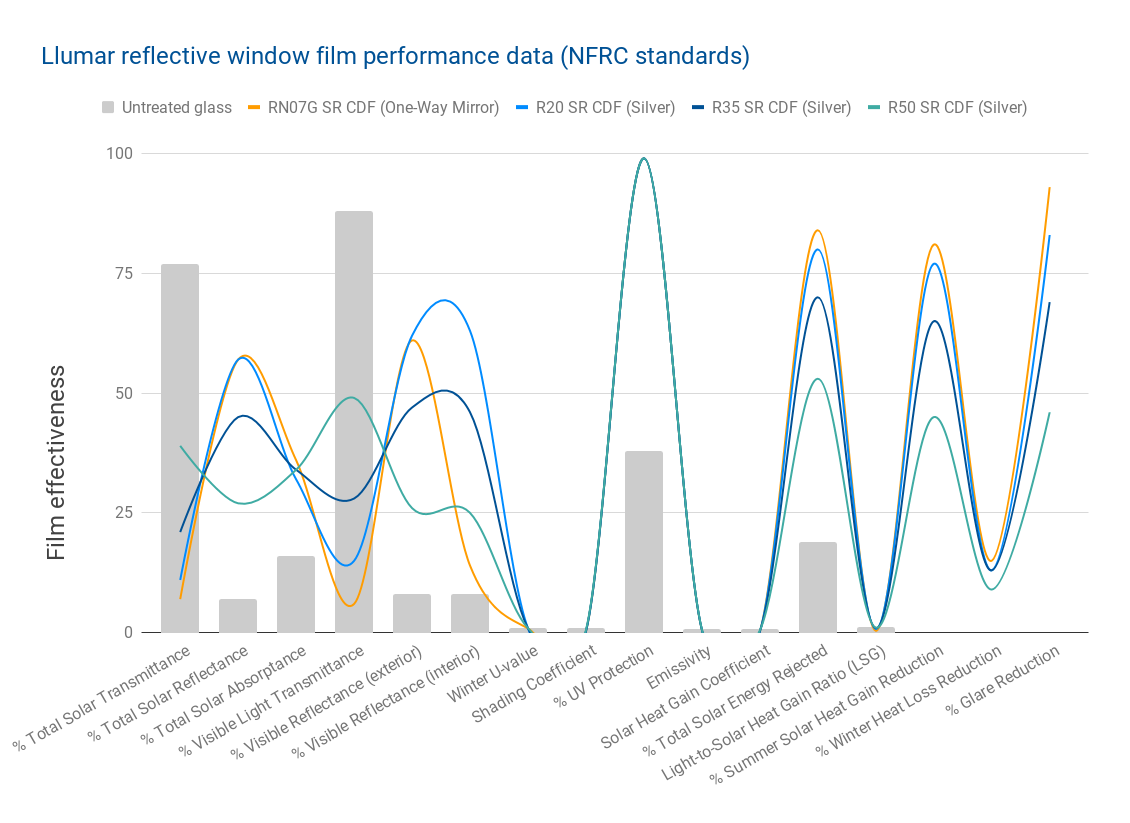 To make it simple, untreated glass doesn't offer much privacy or protection from the sun's light or UV rays. Over 75% of all solar energy makes it through your bare glass windows. On the other hand, our reflective window films block 99% of UV light and block nearly 50% or more of solar energy and light and glare.

One-way mirror film (RN07) is best for when you want privacy during the day without blocking your view. Unlike a lot of reflective window films, Llumar’s RN07 has a higher outside and low inside reflectivity while still blocking heat and glare. RN07 blocks up to 82% of solar energy and 93% of glare.

Llumar's silver reflective window film series is made up of R20, R35, and R50. R20 is a good compromise between maximal heat rejection, privacy, and cost. The number means that in the series, R20 lets in the least amount of light (20%) and so has the darkest reflective silver tint. It blocks more than 80% of sun glare.

Let’s look at another graph of those films’ stats against the untreated glass (which has the same stats as the previous graph!) 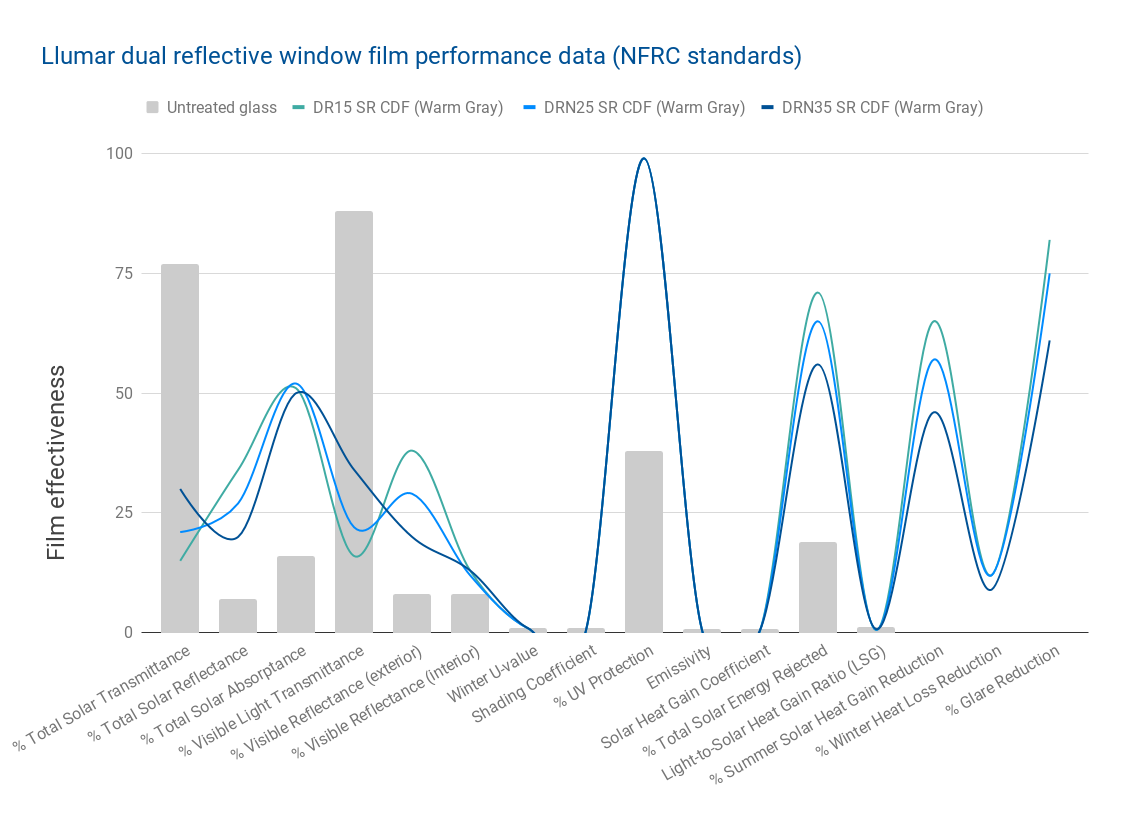 As you can see, dual-reflective window film performs similarly to reflective window film, except they let more light in. The three dual-reflective film difference is that the DR15 provides the most heat rejection, while DR 35 provides the least of the three. Otherwise, they all block 99% of more of UV light, all improve your home or building’s windows’ look, and all reduce hot and cold spots by insulating your windows. They’re also all durable and scratch-resistant for easy cleaning.

Exterior window film is a durable film built especially to withstand the elements outside (whereas most other window films are installed on the inside of your windows). Exterior window film offers the same heat blocking and privacy benefits and is reflective from the outside as well. Llumar’s definition describes it as possessing “impressively effective heat rejection, glare control, 99% UV ray protection.” Llumar’s exterior reflective window film has a strong, scratch-resistant coating that enables the film to stand up to the demands and exposure that are inevitable with exterior installation.

Solar Art carries many exterior window films, but we’ll look at the details for three in particular: RHE 20, RHE 35, and RHE 50. Again, the higher numbers let in more light!

We have one more graph that looks at how exterior window film compares to untreated glass (with the same specs as the other graphs). 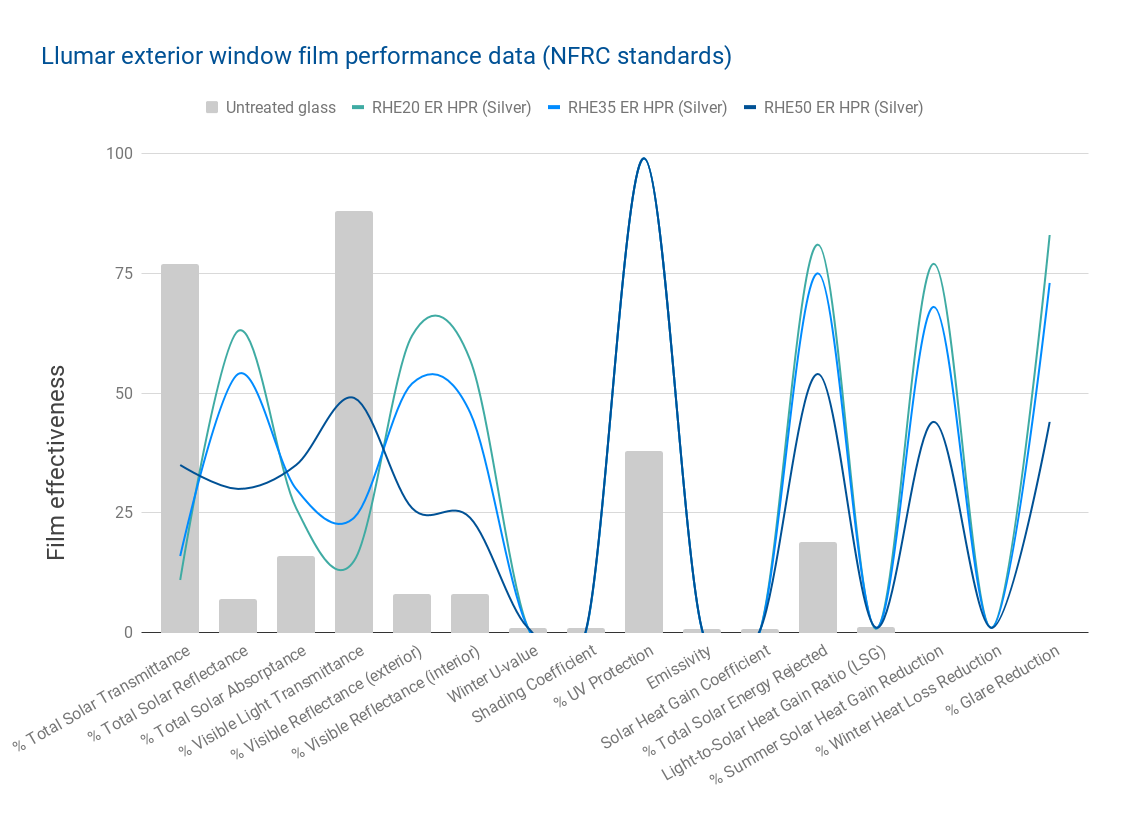 Exterior window films perform similarly to reflective and dual-reflective window films, which is what makes window film so cool! When choosing a product, product performance is not the main concern, you just worry about the aesthetics and unique features.

All three are silver-toned. Between the three films featured here, the 20 offers the maximum amount of heat and glare reduction while the 50 offers the minimum.

So, which reflective window film should you choose? 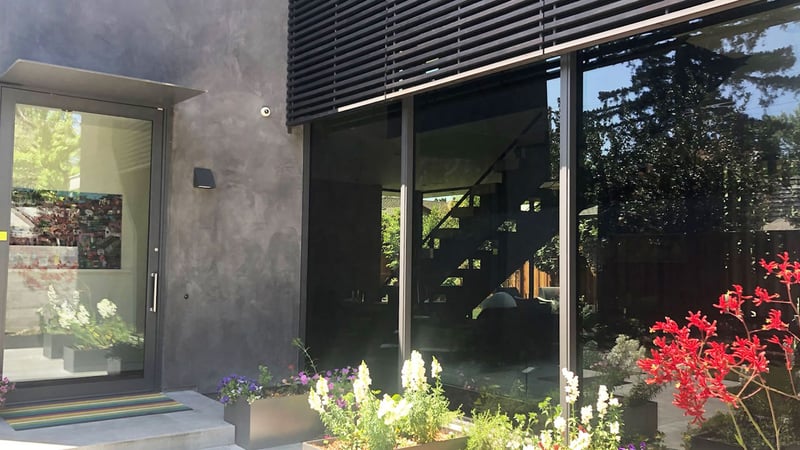 Solar Art works with more than just homeowners. We work with business owners, general contractors, property managers, facility managers, and more, to install reflective window film on commercial buildings of all sizes. Glass is glass, and Solar Art’s window films work the same on both.

If you’re still not sure which reflective window film you need or want even more information, our dedicated team of window film experts will answer every question and point you toward the right film for your home’s windows. Not only do we service solar film and reflective window film, we also service decorative window film, custom graphics, anti-graffiti film, window security film, and exterior building wraps. We take pride in our work and strive for your satisfaction. Talk to us today about cooler, more private rooms!

Talk with our sales team

Check out our latest blog to learn the benefits of window security film for your home or office space! Call Solar Art today for a free window film quote!